Do you often ponder on the most fundamental question, that of: “when are you most fertile.” You know that an answer to this question will allow you focus on high probability period that will improve your chances of getting pregnant right away. If you do ask yourself this most fundamental question, you are not alone. This is one of the most common questions that women who fail to conceive ask. This is also one of the many questions that fertility experts answer every day.

During ovulation and several days after ovulation are considered the most fertile days of the cycle. This is the best time to try to conceive. However, if fertilization does not occur, the egg in the fallopian tubes disintegrates and the uterus starts to produce prostaglandins that change the blood flow to the uterus. The menstrual period starts and then the cycle begins again.

So the answer to the most sought question “When are you most fertile?” is about 14 days after the first day of your menstrual cycle. To be precise, there are some signs that your body tells you that you are ovulating; these signs are sure ways to tell when are you most fertile. Knowing these signs can significantly increase your ability to conceive. Here are the most common signs of ovulation:

If you have a regular cycle of 28 to 35 days, you can definitely know when exactly you ovulate. However, it is also important to learn how to read your body. The initial sign that you are ovulating and possibly fertile is your cervical mucus. As a woman approaches ovulation the cervical mucus appears clear with a consistency of raw egg white and the last day that you see this type of mucus is the day that you are most fertile, this is when ovulation is.

The best time to check your cervical mucus is right after you get out of bed in the morning. This will surely determine when are you most fertile. 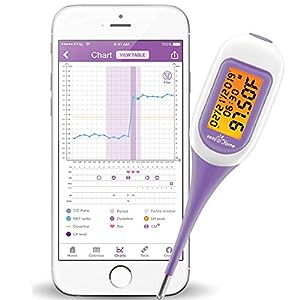 A woman’s basal body temperature is also a determining factor for fertility.
Your BBT is considered your lowest body temperature in a 24 hour period. It is determined after you wake up in the morning just before you get out of bed. Just before ovulation, your BBT is from 97.2 to 97.9 degrees Fahrenheit and at about 2 days after your ovulation there is a significant rise of ½ to 1 degree which lasts up to your cycle.

View our range of Basal thermometers including ones which can now connect to your smart phone giving even more precision and accuracy.

The importance of charting your BBT readings over several months, will help you get to know your body more determining exactly when are you most fertile.

A feeling of tenderness on your breast is also a sign that you are fertile. Because of the many hormones that are involved in the menstrual cycle your breasts also becomes more tender and if you try to feel them, you may feel lumps and small nodules that may be quite painful. Breast tenderness usually appears days before and after ovulation. Thus it is important to get to know your body especially your breasts even before ovulation to be conscious about the changes that it undergoes during your fertile days.

Tender and painful abdominal area may be a possible sign of fertility. When the eggs are released from the ovaries and collect in the fallopian tubes, there is slight pain that may be felt over the abdominal area. Some women may not feel this particular sign but most women, especially women with regular menstrual periods, can tell that this is a positive sign for fertility. It is important however to rule out any illnesses and digestive problems before concluding that this is in fact a sure way to know when are you most fertile.

Fertility experts believe that women during their fertile days have more desire to have sex. This may be true considering sex drive may also be influenced by hormonal changes. This however is not a determining factor for all women to follow. Anyone can have an increase in sexual desire anytime within their monthly cycle. This therefore is not a concluding factor to know when are you most fertile, But one that is maybe worth noting and charting.

Mood changes are also common during ovulation but these are not a determining factor for fertility. Women may seem more emotional, sometimes more demanding and needing more attention during these times. But although some women are seen with these changes, some have no recognizable changes at all. It is therefore important to take mood changes along with other fertility determinants to correctly know when a woman is most fertile.

All of these changes in a woman’s body must be recorded and if possible charted to accurately determine ovulation days and when she is exactly fertile. It could be a chore to measure this and inspect that but these have to be done to be able to accurately conceive on your fertile days.

If intercourse during your fertile days and carrying out your own fertility tests for you and you partner, still has negative results, then it is definitely time to consult a medical professional right away. A gynecologist or a fertility specialist can determine what is physically wrong with both the man and the woman and would probably run some tests. He can also give the most appropriate treatment for any infertility problems and address any problems with pregnancy right away.

In summary to answer that pressing question: when are you most fertile, requires that you understand your menstrual cycle which should act as a guide in determining the answer to this most asked question.

Browse our full range of Ovulation and Fertility

\
Hibiscrub® antimicrobial Hand Sanitiser
Used for 45 years+ in hospitals around the world
Now available to Buy for use in the Home.